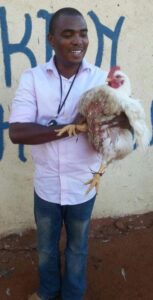 Peter Meyer raises broilers in South Africa. He is a big fan of the KwaZulu-Natal Poultry Institute (KZN PI), having taken three courses, all supported by the World Poultry Foundation.  “They are doing great work,” he exclaimed.

Peter raises 1,000-1,500 birds per cycle in Limpopo province and sells primarily to the live market, as the closest abattoir is far away.  But he says, “at such a small-scale we are robbing ourselves; we have to grow.”

During his first KZN PI course on Biosecurity, he realized his farm was situated too close to the community; he’d have to move.   After taking the Profitable Broilers – Advanced Course on line, Peter upped the quality of his feed mix, looked for a more credible chick supplier, switched to potable municipal water, and hired the services of an external bookkeeper.

Hungry for ever more learning, the young farmer, who had studied electrical engineering but followed his heart into the poultry industry, seized the opportunity to attend KZN PI’s recent Abattoir and Food Safety course.  He was astounded to watch a speaker set up a low-throughput abattoir in the middle of the classroom and learn its reasonable price.  “It’s doable,” he thought, “I could operate my own abattoir!”

The culmination of the five-day course for Peter was visiting a small abattoir where “practicals made theory make sense,” he exclaimed.  Participants were guided in everything from how to hold the bird to packaging the meat nicely, and everything in between as they each slaughtered four chickens.  He saw, for example, why 10-15 liters (2.5 to 4 gallons) of water are needed to clean a bird properly. “Wow,” he said, “the visit was one of the most beautiful things ever.”

On the 600-mile drive home, Peter, who recently finished an on-line Small Business Enterprise course at the University of Johannesburg, had a lot of time to crunch numbers and think about how to improve his livelihood and benefit his community in Taaiboschgroet village.

He has his eyes set now on selling some assets and buying an appropriate piece of land for a broiler farm.  He’d like to build automated chicken houses, enclosed, and with cooling, and, of course, procure a small abattoir with the help of his municipality in securing the costly permits.